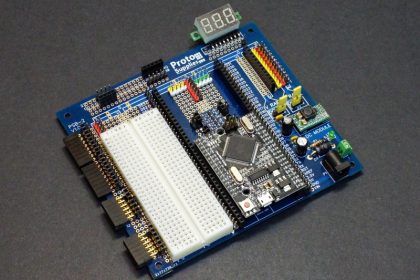 As you can probably imagine I spend considerable time evaluating and testing products.  Much of that work requires using a typical solderless breadboard setup with an Uno or Mega 2560 and wiring things up as needed.

To create a better, more efficient test setup, I decided to utilize the new Mega 2560 Pro MCU Proto Board to create a dedicated breadboard setup with convenient mounting points for modules, displays and servos for testing and evaluating.

I discovered that the setup works quite well for a lot of general project breadboarding and others might find a similar setup useful, so I am documenting it here.

With our project definition complete, we were able to create the list of part requirements.

The actual build was straightforward.

The main thing was deciding where to place the misc headers for connecting modules and associated jumper points.  Dry placing all the module headers first before committing to soldering them in is important as unsoldering headers is not a fun project.  If you do need to unsolder a header (as I did), you can unsolder each pin individually and pull them out one-by-one.  Then if necessary go back and remove the solder from holes.

You want to ensure that the headers for connecting modules are positioned to run perpendicular to the connection points so each pin of the header is separate from each other.  The male and/or female headers for making jumper connections are positioned parallel to the module headers so that the board traces make all the connections for you without having to connect any wires.  I only have about 10 wires on the back of the board to connect everything up. 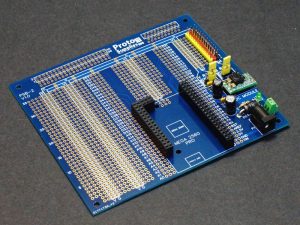 When Mega 2560 Pro MCU Proto Board is assembled with the optional component kit, you get a flexible platform to work with.

It includes a socket for the MCU module and a DC power input circuit on the right side that includes an MP2315 DC-DC converter which is very handy for powering servo motors and the like.  Besides being able to adjust the voltage on that rail, it also provides some protection from the electrical noise create by the servo motors.  More information can be found on the product page for the board. 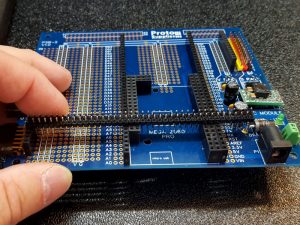 On the board, the Mega 2560 Pro connections are all brought out to 38 pins on each side of the module with the pins labeled.  Each I/O pin has 3 solder pads.

I simply soldered both a 40 pin female and male header into each side of the module to have two connections points for each pin.  I cut the connectors down to 38 pins before soldering them in.

I found that using other opposite sex headers to hold the headers I was soldering in place helped in a number of areas like this one. 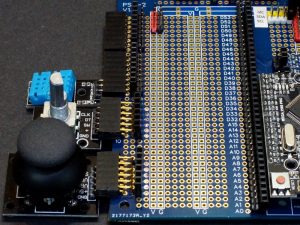 I placed most of the module connections along the left side of the board.

I used larger connectors for maximum flexibility with modules that have different number of pins, but you do need to ensure you offset the module and jumpers to match up as it is easy to get a pin off.

The front two connectors I used double row right-angle female headers for added strength as I planned to use these mainly for user input devices like a joystick.  Single row headers should work OK as well.

For the other single row right-angle headers I used the stackable headers since they had long pins and I could bend the pins at a right angle before soldering and cutting the pins to length. 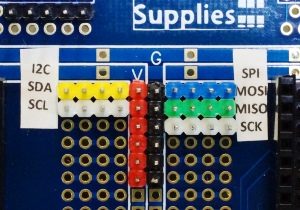 For I2C and SPI bus connections, I brought the pins out to colored male headers where I could easily connect up to 4 devices on each bus along with power and ground.

I then created some labels since I won’t remember the color codes I assigned.

These pins are wired to the MCU I2C and SPI bus pins as follows:

I didn’t bother bringing the TX/RX serial lines out to breakout headers since  these are clearly marked on the board and I never hook up more than one anyway.

If these buses are not being used, those pins can be used for general purpose I/O as well. 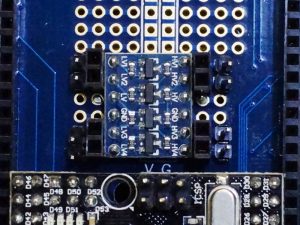 One of the things that I hate to do is wiring up logic level converters for working with 3.3V modules so I decided to permanently install one on the board so that I can easily just jumper the signals though as needed.

I used the bi-directional 4-channel module as it works well and is inexpensive and I never need more than 4 lines.

I permanently wired the LV pin to the 3.3V pin on the Mega 2560 Pro module and the HV pin the the V Rail which will typically be 5V.  I did not hookup the ground pins as they are not used on the module.

I then soldered both male and female 2-pin headers on the LV1-4/HV1-4 lines for maximum flexibility.  5V signals from the MCU connect to the right side and 3.3V modules connect to the left side.

I love these little DVM modules.  They can be quite handy for making basic voltage measurements without hauling out a meter and trying to hold the probes while also manipulating a pot or something. 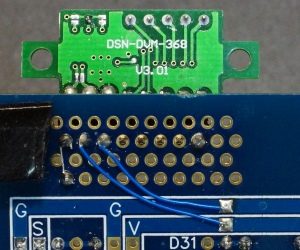 To mount it, I unsoldered the 3 wires from the back of the module and then used a section of right angle male header to mount it.  Though it only requires 3 points to wire it in, I installed a larger header so I could also solder to additional pins on the module to give it more mechanical strength.

Some DVM modules will have flat solder pads where the wires were and others will have through holes were the wires are attached and may have 8 or 5 total pins that can be soldered to.  I cocked the right-angle connector a little to give a bit of an angle to the DVM for easier viewing.  I mounted it in the offset header area on the back right side of the board since I wasn’t using that area for anything else.

To wire it up, take note of which color of wire goes to each of the pads before removing them as they vary between different versions of this device.  Wire the pad for the red wire to the V Rail and wire the pad for the black wire pad to a ground point.  The white wire is the voltage to be measured.  If you put a male pin the the connection point as I did, you don’t need to wire anything since a trace already connects the two, but I did anyway for apparently no reason at all. 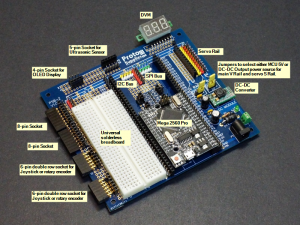 Here is the finished board minus a few parts that I added later like the LEDs and switch.

For the solderless breadboard I removed the power/ground rails from a 400 tie-point to allow it to fit in the space available.  My intent was to stick it down but it covers the I/O labeling so I left it loose so it could be inserted only when it was needed which isn’t all that often.

Putting it to Use 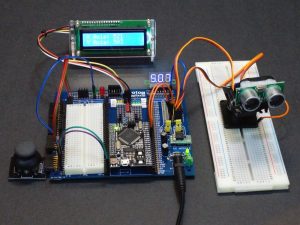 As a test application, I connected a joystick, 16×2 I2C LCD display and 2-axis servo platform.  The joystick moves the servos and the LCD displays the joystick readings.  Not an overly complex setup, but it utilizes some of the key features of the setup.

The LCD simply connects to the I2C headers including power and ground.

The joystick plugs into the first horizontal header and then is jumpered to the analog pins on the Mega 2560 Pro used to monitor potentiometer outputs.  This connector also requires power and ground.  A jumper connects from the button to the green LED to show when the button is depressed.  It was at this time that I realized it was dumb to put the jumper connection in front of the LED since it partially blocks the view.

The servo connectors simply plug into the S Rail.  Ensure the orange signal wire is plugged into the yellow header.  Two PWM outputs of the Mega 2560 Pro are used to control the servos.

Overall I have been very pleased with the functionality of this Mega Breadboard.

The only real mistake was putting the LED jumper points in front of the LEDs instead of behind them.  A trivial thing, but I will change this as it annoys me every time I look (attempt to look) at the LED.

I need to sprinkle a few more power/ground pins around the board to always have one close to the sensor I am hooking up.  If I have to grab for something longer than a 4″ jumper for connecting power and ground, I need to add another power/ground connection point.  I also need to add a couple of isolated ground pins for more easily hooking up a scope or meter ground lead.

I’ll probably add a small thumb adjustable potentiometer to the board wired between V Rail and Ground to provide easy access to a variable voltage.  I’ll add two jumper points for the center tap on the pot.  One can go to the circuit I am working with and the other can go to the DVM so I can see what voltage I am setting.

9/29/19  Mike H. shared his customized version of the Mega Breadboard.  Mike primarily works with model train electronics but does some general hobby electronics as well and made some changes to adapt it towards his style of breadboarding.

For the solderless breadboard area, he soldered in single-row white, red and black female headers to make a permanent breadboarding area.  The copper traces on the board take care of connecting the white rows and the red & black power/ground column runs.

On the top and left edge connectors, he went for maximum flexibility and strength by soldering in large double-row female right angle headers rather than using several smaller connectors or using single row connectors.

Mike put his logic level converter in a socket to make it easier to change out later if desired.

To protect the bottom, he mounted the board on a piece of acrylic with rubber bumpers.

He still plans to build a bracket to mount a dual voltmeter module attached to the acrylic base so that he can monitor the voltage on both power rails at all times. 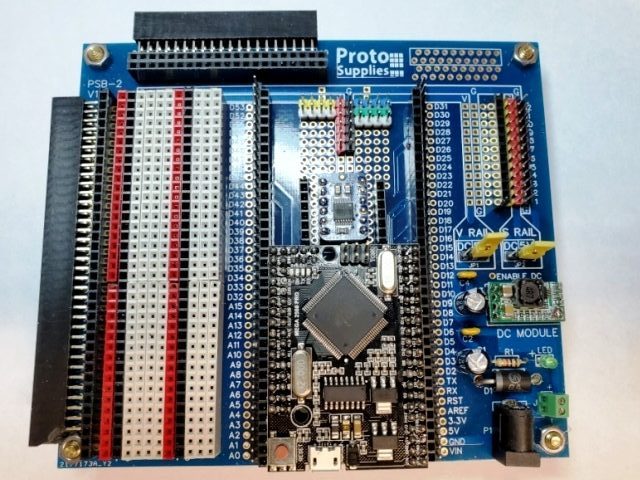 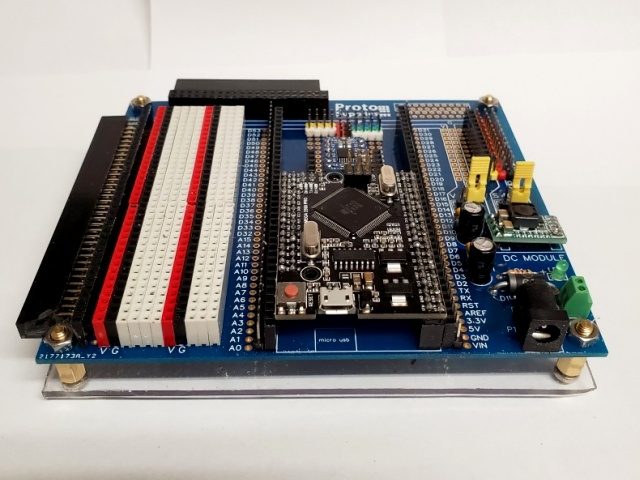 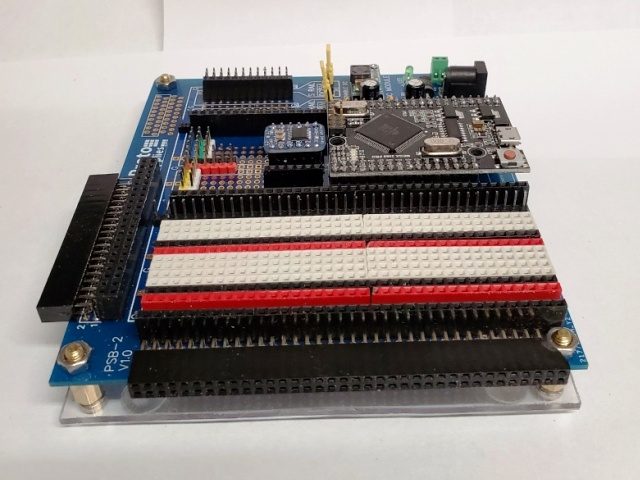 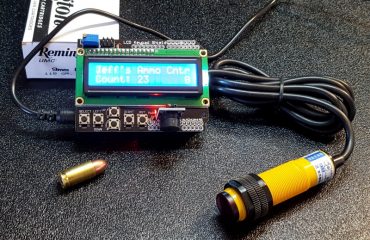