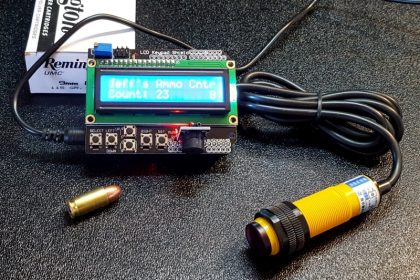 We recently had a customer, Jeff, looking for a way to count the amount of ammo produced by his reloading equipment.

The manufacturer of the reloader equipment offers a counter that uses a mechanical switch to increment the count when you pull down the handle of the reloader.  If the round doesn’t load properly, it will still count and the final count will be off.  His goal was to have something that would count the ammo as it fell into the bin after it was successfully ejected by the reloader.

Looking for a solution, and with mechanics as his strong suit, Jeff reached-out to us for electronics guidance.  I gave him a shopping list, and once purchased, I did the assembly and programming, since it was a fun and easy little project.  I figured I would share it on our blog in case anyone else finds it useful.  This basic setup is generic.  You can use it in a number of different applications or expand on it in a number of ways.

With our project definition complete, we were able to create the list of part requirements.

The actual build was very straightforward!  We were able to borrow much of the code from our examples for each of the parts we did use.  The little buzzer feature gave the most difficulty.  In hindsight, while writing this post, I realize that a small design error got by me.

Since this was a dedicated application, we did solder the sensor pig-tail cable directly to the Uno board.  We also added a strain relief using one of the mounting holes.  The blue wire is going to Ground, the brown wire to 5V and the black wire, which is the sensor output, connects to digital pin 2.  We chose Pin 2 because it has interrupt capability.

The E18-D80NK sensor output is normally HIGH and goes LOW when an object is detected.  It stays low as long as it detects the object, so the interrupt is setup to trigger on the falling edge of the waveform.

The back of the sensor has a small screw which adjusts a potentiometer that sets the detection distance.  Originally designed for counting objects moving on a conveyor belt, this feature is handy for adjustment to avoid seeing objects behind what you are targeting.  For our application, we set the detection distance to give the shortest range possible which was about 1.5-2″, as to not see the operator or mechanical parts of the machine in its field of view. 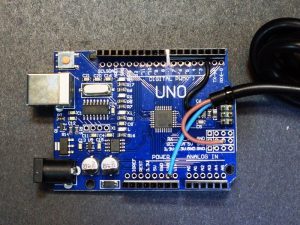 The buzzer sound output was too weak if driven directly off the Uno digital output.  Also, it can draw more current from the output pin than is safe.  The addition of a small driver circuit to the back of the buzzer was able to address both issues.

This driver consists of a small 2N3904 NPN transistor, 330 ohm current limiting resistor to protect the Uno pin and a 10uF filter capacitor.  None of these component values are critical.  The transistor can be any small NPN transistor, the resistor should work fine in the 330-1K range at least and the capacitor can be larger, but there is some space constraints.  I didn’t bother testing a smaller cap to see if it would work, but it might.

Due to physical mounting considerations, we decided to power the circuit off the VIN rather than the 5V, which was our original intent.  The power spike of the buzzer kicking-on caused an occasional power glitch, thus the addition of a filter capacitor at the buzzer to keep things happy.

In hind-sight, part of the problem was over-driving the buzzer with the increase of the operating voltage from 5V to over 7V.  I should have added a small value series resistor on the buzzer power leg to lower the maximum current and to reduce any power-on voltage spikes. 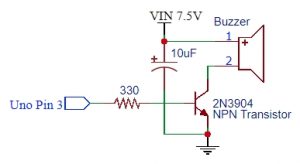 We just soldered these extra components onto the backside of the module.

Using a couple of holes with solder pads, the buzzer module was soldered directly to the LCD shield board.  The module was soldered to the VIN and Ground points.  The 3rd pin, which is the signal input pin, was cut off and a blue wire routed through the hole and under the board to connect to the D3 pin on the other side of the shield.  D3 was selected because it has PWM capability. 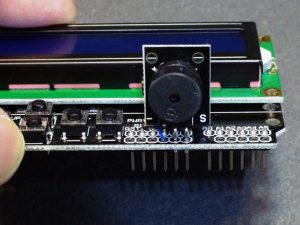 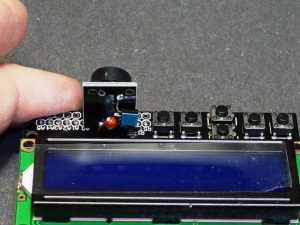 The buzzer is driven using the tone(pin, frequency, duration) command.  I finally settled on 200Hz for 300mSec as being a decent ‘Beep’ sound that wouldn’t drive me crazy too quickly.  I did add a pushbutton feature to turn the buzzer off – just in case it became annoying.

A bit on the loud side, for my taste, adding tape over the hole in the buzzer did dampen it to just about the right level.  Again, lowering the current through the device would have been the better solution for lowering the volume.

The LCD uses a 4-bit parallel data bus to automatically connect to the necessary Uno pins when the shield is installed.  Operation is fairly simple using the LiquidCrystal.h library.

The keys on the keypad connect to analog input A0 through the shield connections.

For those not familiar with this LCD w/ keypad, the keys are arranged in a voltage divider network using resistors, quite a novel technique.  The output is then fed to the A0 analog input on the Uno.  As you push the different buttons, the voltage divider, and therefore the output voltage, changes.  By measuring the voltage against approximate voltage ranges, you can determine a button push and which button is pushed. While more complicated than simply using a digital input for each button, it does free up digital inputs which might be helpful in some applications.

The shield occupies the following pins on the Arduino with the rest being available for other uses.  We use D2 for the sensor interrupt input and D3 for the buzzer output:

Some final touches; mounting the assembly on an acrylic Uno base in case it’s set on something conductive and to allow for drilling to mount on a wall.  And not to be forgotten, the creation and addition of the button graphic.  The graphic was created in MS Paint just to irritate my wife who does a lot of fancy graphics in Illustrator and thinks I am the only person left in the world crazy enough to still use MS Paint for some stuff. 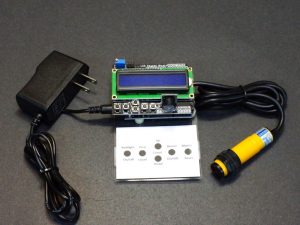 Here is a little better view of the functionality of the buttons and the display layout.  Since there was an extra button, the ability to turn the backlight On & Off was added.  The far right button is tied to the Reset of the Uno, taking everything back to the power-on state. 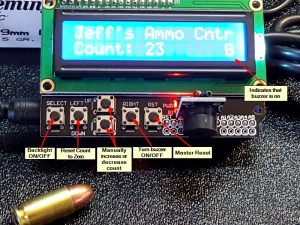 Below is the software created for this application.

Once the setup was complete, a cardboard mock-up chute and 9mm ammo drops were our functional tests.  Everything worked perfectly in my simple test setup.

After shipment to the customer, he ran into a significant problem.  The system was getting multiple counts per round on an almost continual basis.  This of course defeats the whole purpose of the device.

Our customer took some pictures of the setup and I was able to locate a YouTube video of the same equipment in operation.  I noticed immediately how tight the space was where the sensor needs to go.  Specifically, how close to the sensor the handle and hand came while operating the machine.  My first assumption was the sensor field-of-view was too big and it was seeing things other than just the passing ammo.

After a couple of emails and phone calls and some general brainstorming, I came to a different conclusion.  The vigorous nature of the ejection of the ammo into the hard chute was causing the ammo to bounce aggressively.   Since the sensor connects to a very fast interrupt input on the Uno, the ammo was moving in and out of its detection beam several times as it came into view of the sensor resulting in multiple counts. 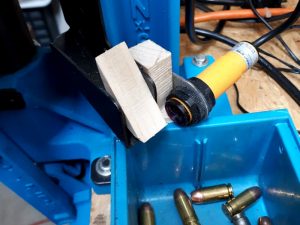 Fortunately Jeff has strong mechanical skills and was able to come up with a fix.   A wedge block inserted in the chute helped settle the ammo before exiting the chute where the sensor was located.  This is a picture of his prototype to verify the fix before building something more permanent.  This feature will need to be able to be changed-out depending on the size of the ammo being reloaded.

The mistake I made in my testing was that my non-slick cardboard chute and easy ammo drop-down did not represent the true nature of how the ammo was actually being ejected.  A more representative fixture would have caught this issue in my testing.

A possible design fix for the counter itself could be to add a bit of debouncing to the sensor interrupt counter routine.  This could work since the ammo won’t be coming down the chute faster than a couple of seconds apart.  Also, since this isn’t doing much other than waiting around for the sensor to be tripped and monitor the button status, the counting could probably be done using a polling scheme and debounced with something like a simple delay(500) statement to avoid multiple triggers on the same ammo. 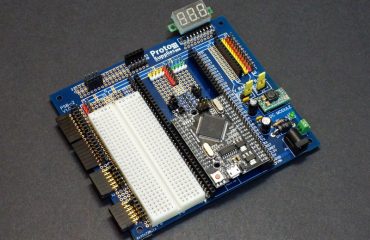 3 Comments to “ Counter For Reloading Ammo”