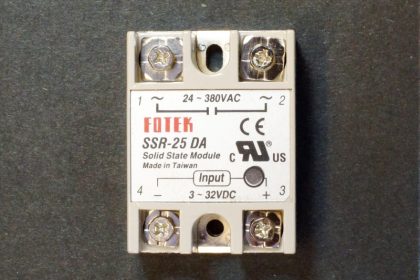 I thought I would share the results of one of our tests that caught counterfeit product that was not only fake, but constructed so that it would perform at only 50% of its rating.

The part in question is a FOTEK SSR-25DA  which is a 25A AC Solid State Relay.

As with any new product, before we offered them up for sale we tested our first shipment of these relays that came in the door.  These types of relays often need to be mounted to a heat sink under higher power loads, but during our testing this one was getting hotter quicker than expected for the 1300W (50%) load that we had it under, so something didn’t seem quite right and we decided to investigate further.

Looking on the internet, it quickly became obvious that there have been a lot of complaints about these parts failing.  Since the manufacturer FOTEK is considered to be a good quality manufacturer overall, the common conjecture is that the failing parts are counterfeit and therefore presumably of inferior construction. 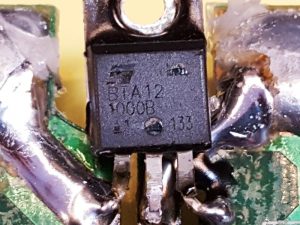 One of the modules was dissected  to see what we really had and the physical construction was found to actually be quite reasonable and unlikely to be a quality/performance issue.

What we were surprised to find is that the Triac used in the device is part number BTA-12-1000B.  This device is spec’d to handle a maximum of 12A RMS on-state current which is far short of the 25A that the relay is rated at.

That change from the part that is presumably in the original relay would appear to have been done as a way to produce less expensive relays since the 12A triac is approximately 1/3 the cost of the 25A parts.

If you are in possession of some of these parts and wondering what you may have, there appears to be a couple of possible ‘tells’ to determine if they are genuine and able to handle the rated power.

There are other items that may be tip-offs as well such as the sloppiness of the print around the LED, flat vs textured appearance of the label stock etc.

Here is a link to a UL notice released several years ago about fraudulent use of the UL logo that calls out some of the signs of fakes that were identified at that time.  UL Link

Below are a pic of a genuine relay with some key items to watch for.  Below that is the label from the parts that we received.  You can click to enlarge the pics. 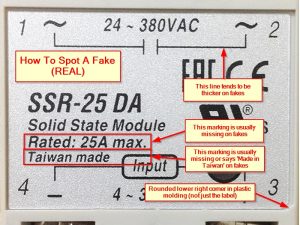 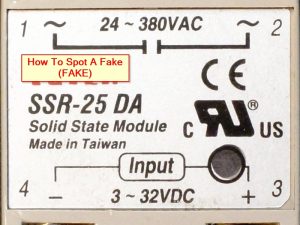 Looking at these relays for sale on the internet, it appears that the vast majority are fakes from what I can determine.

If you do have some of the fake parts, it is impossible to say if they all have the same shortcoming regarding the underspec’d part, but it is probably likely.  Assuming construction is similar to what we found, it appears that as long as they are derated down to be within their 12A limit and have good heat sinking at higher power levels over maybe 6- 7A, they should probably perform OK.  Ours ran comfortably at 5A and were starting to get pretty hot up around 8A with no heat sinking.

If you have any further info on this topic or corrections to the information I have found and provided, please feel free to share.