We offer these for use with our WS2812 Adapter for our Prototyping System for Teensy 4.1 baseboard, but can be used with just about any microcontroller such as an Uno or ESP32 to create interesting displays and effects.

These LEDs are the same type that are sold under the brand name of NeoPixels where each LED is separately addressable.

The communication used with the LEDs is a 1-wire interface specific to these devices.  There are several libraries available to handle the interfacing details including the Adafruit NeoPixel  library  and the more advanced FastLED library, both of which are supplied with the Arduino IDE.

There are no specific addresses for the LEDs, rather the color data for each is sent down the wire sequentially with the first LED taking the first color data that comes down the wire, the second LED takes the second color data and so on.  After all LEDs are updated, a global command is given to display the new data simultaneously.

The individual LEDs are mounted on 0.5m long flexible PCBs that are connected together into a 1m / 3.28ft long continuous strip.  The strip is flexible and can be curved as needed, but avoid sharp bends.  The back has an adhesive liner that can be used to permanently mount the strip if desired onto a clean dry surface.

These strips have JST-SM 3-pin connectors on both ends.  The connectors supply 5V, data and ground.

The input connector which is on the outside of the roll is a female connector for connecting to a microcontroller.  A male pig-tail is included in the package for connecting this end to screw terminals such as found on the WS2812 Adapter or it can be adapted for other connection requirements.

The output end of the strip has a male connector for optionally attaching to one or more additional strips to increase the length.

Both connectors include an extra 5V and ground wire stub so that additional power can be optionally supplied to the LED strip at one or both ends or at multiple points if several strips are connected together to avoid excessive voltage drop along the long length of the strip(s).  An excessive voltage drop will cause the far end of the strip to be dimmer or change color or stop working altogether.  If these wires are not used, heat shrink can be applied or they can be taped back on themselves to avoid any risk of shorting or they can be cut off.

These LED strips operate at a nominal 5V.  The WS2812B chip spec is 3.5 – 5.3V so there is some flexibility in the voltage range that they will function over, but keep in mind that there will be some voltage drop along the long length of the strip so try to stick with something close to 5V for best performance.

The strips typically must be powered from a separate 5V power supply.  Don’t attempt to connect them to the 5V from the microcontroller board unless you are going to light only a small number of LEDs at a time and the brightness is kept down.  When using a separate power supply, ensure a common ground exists between the MCU and the LED power supply.

The LED strips should always be connected to the power source with the power turned off to avoid possible damage.

The current requirements will vary a lot depending on how the LEDs are being driven. Keep in mind that at maximum brightness and displaying full white (all red/green/blue LEDs fully on), each LED can take up to 60mA / 0.3W, so the full strip can take up to 30W which is 6A.

When working with it on the bench, you can keep brightness down around 25% which is still fairly bright and get by with something like a 2A 5V power source.

For large arrays at high brightness, careful consideration needs to be given about the power supplies to use and the size of wiring needed to distribute power feed a power hungry setup.

It is recommended to have a large 1000uF electrolytic capacitor on the input power leads to help avoid damage to the LED strip from the turn-on current surge. If used with the WS2812 Adapter, it includes this capacitor.

The LEDs are driven using a 1-wire serial interface.

The drive line should also include a series resistor in the 100-470 ohm range to dampen signal back reflections.  The WS2812 Adapter uses 100 ohm resistors.

The data is driven at a 800Kbps rate with fairly tight timing requirements.  A software library is typically used to drive these strips which makes them very easy to use as it hides all the messy details.

Though the LEDs are referred to as being addressable, that is not true in the strictest sense.  The LEDs are actually accessed sequentially in a simple but effective cascading manner.  When an LED receives data, it doesn’t know what its position is in the strip, it simply takes the first 24-bit of data it receives, stores it and passes the rest of the data down the wire.  The next LED similarly takes the first 24-bit of data that it gets and passes the rest along and so on.  After all LEDs are updated, a global command is given to display the new data simultaneously on all of the LEDs.

Besides chaining strips together to lengthen them, an individual strip can be shortened by cutting between the individual LEDs.  A line through the center of the copper pads show the basic cut point.

This also permits some creativity by cutting the strip and soldering wires to the pads or using right angle adapters that are available to sharply change direction such as going from horizontal to vertical direction. 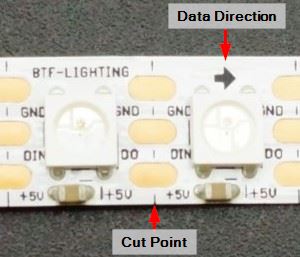 Note that there are arrows that shows the direction of data flow if you are working with sections of strip with the ends cut off.  Also visible in this picture is a 0.1uF MLCC capacitor that is mounted  next to each pixel to help filter the power to the WS2812B chip inside of the LED package.

LEDs tend to be fun to play with in general and RGB LEDs are the most fun of all, especially when you have a lot to play with and you only need one pin to control them.

These addressable LEDs are frequently used for color accents around objects or to create artistic or otherwise interesting displays.  Now’s the chance to make that Knight Rider display you always wanted.

The program below uses the Adafruit NeoPixel library to exercise the strip.  It is a shortened version of the strandtest example program that is installed when the library is downloaded.  It has some of the excess comments removed for brevity.  For full comments open the example program.

Since we are using the WS2812 Adapter, we are connecting the DI input (green wire) to Pin 24 of the MCU, but this can be changed to any available data pin such as pin 6 on an Uno.  Connect 5V (red wire) to a suitable 5V power source and GND (white wire) to ground.  Ensure the LED power ground is common with the MCU ground.