For Prototyping System for Teensy 4.1

The WS2812 Adapter makes it easy to work with addressable LED strips while using the Prototyping System for Teensy 4.1.

The WS2812 Adapter provides convenient 5V power connections and logic level shifted and buffered data connections for one string of addressable LEDs to quickly and easily get up and running to work with these fun peripherals.

The adapter also provides two RJ45 connectors with 8 logic level shifted and buffered data connections to provide the same functionality of the original PJRC OctoWS2811 adapter for driving larger LED arrays using CAT6 cable and external power.  Though we sell the original OctoWS2811 adapter as well, it does not work well on the Prototyping System baseboard due to the connector orientation.  The RJ45 connections also requires extensive wiring to get started working with addressable LED strips and best suited for more serious projects. 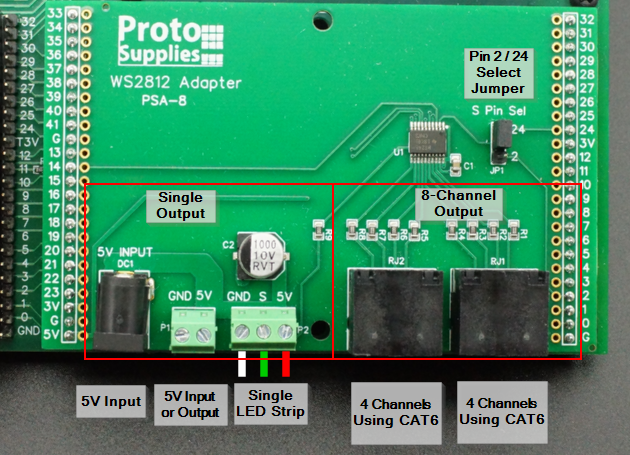 Using the WS2812 Adapter with the Single LED Strip Connections

The connections on the left side of the adapter marked ‘Single Output’ allow for simple connection to a single strip of LEDs for easily working with it.  More than one strip can be connected in series, but they will share the same data pin.

The adapter has a standard DC power jack (DC1) for connecting an external 5V power supply to power the single LED strip output.  Alternatively, a 2-pos screw terminal next to it (P1) can be used to connect to a 5V power source.  The baseboard 5V power is not used to power the LEDs to avoid possible power issues with the other circuits.  A large 1000uF capacitor is included to help safeguard the LEDs from power surges.  The baseboard 5V is used to power the 74HCT245 level shifter on the adapter.

If the standard DC power jack is used to input 5V power, the 2-pos screw terminal can alternately be used as an auxiliary output power connection for the extra power leads of the LED strip. This might be handy if pushing the current limits and the screw terminals can be used to connect power to the power leads at the far end of the cable to minimize voltage drop across the strip.

Take note that the LED strips can be quite power hungry depending on the number of LEDs and how they are driven.  At full brightness and when driving white (red/green/blue LEDs all full on), each LED can draw up to 60mA / 0.3W of power.  A 5 meter strip with 300 LEDs can therefore draw up to 18A / 90W of power.  Since the LEDs can be annoyingly bright at full power, when working with them on the bench they can be set down around 10% brightness and then they only draw about 1.8A max and you can get away with a 2A power source.  In our example program below that creates bouncing colored balls, you can easily run two 15 foot strips (30 ft / 600 LEDs total) from just a standard 1A wall wart since only a few LEDs are being lit at any one time.

When connecting or disconnecting the LED strip, the external 5V power should be removed first to minimize the risk of damage to the LEDs.

The adapter has a 74HCT245 IC which is used to logic level shift the 3.3V logic from the Teensy 4.1 up to 5V to properly drive the LEDs.  It also provides some buffering and protection for the Teensy pins.  The output has a 100 ohm series resistor to minimize signal reflections.

A jumper (S Pin Sel) allows either pin 2 or pin 24 of the Teensy to drive the data to the LED strip.  Pin 2 is also connected to the LCD interrupt output if the LCD is installed so pin 24 is usually the easiest pin to use since there are no other conflicts on the baseboard.

Note: that as of Rev 1.1 of the Prototyping System for Teensy 4.1 baseboard, there is a jumper to remove the LCD interrupt on pin 2.

A 3-pos screw terminal allows for easy hookup of the typical male JST-SM connector pigtail supplied with standard LED strips like the ones we provide.  The female (input) end of the LED strip then plugs into the male connector on this pigtail.

The RJ45 connectors on the right side of the adapter allow for connecting to multiple LED strips using CAT6 cabling for larger and more complex LED projects.  The OctoWS2811 library supports using these connections.

In this case, 5V power to the LEDs would be delivered from one or more power supplies directly to the LED strips.  The power would not come through the adapter. 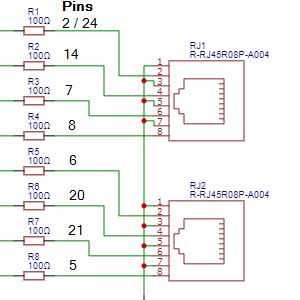 The 74HCT245 IC  is also used to logic level shift the 3.3V logic from the Teensy 4.1 up to 5V on the RJ45 connectors. The outputs have 100 ohm series resistors to minimize signal reflections.

The original OctoWS2811 PJRC adapter uses pins 2, 5, 6, 7, 8, 14, 20 and 21 which are also used on this adapter tp keep compatibility.  Pin 2 is shared with the single strip connection and as in that case, the S Pin Sel jumper allows either pin 2 or pin 24 of the Teensy to be used.  Since pin 2 is also connected to the LCD interrupt output if the LCD is installed, pin 24 is usually the easiest pin to use since there are no other conflicts with the other pins on the baseboard.  The pins can be remapped in the OctoWS8211 library.  The File/Examples/OctoWS2811/Teensy4_PinList example in the IDE shows how to define the pins to use.

Note: that as of Rev 1.1 of the Prototyping System for Teensy 4.1 baseboard, there is a jumper to remove the LCD interrupt on pin 2.

The process for doing this is the same as the OctoWS2811 adapter so I will refer you to the PJRC OctoWS2811 Adapter product page for more details on wiring up the LEDs in this configuration. 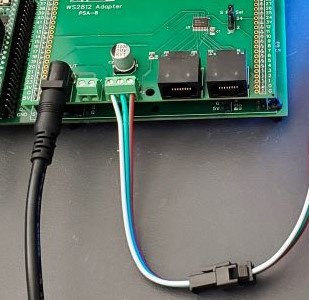 The example shown here uses the single strip output since LED hookup is very easy.  Just wire up the LED strip with white wire to GND, green wire to S and red wire to 5V then plug in an external 5V power source like an AC/DC wall adapter.  The AC adapter doesn’t need to be big since this program only lights a few LEDs at a time.

Recommend leaving PIN set to 24 to match the jumper on the adapter, but adjust the NUM_LEDS constant if you are using a different size of LED strip.

The program itself is adapted from a program on the Tweaking4All.com website which also has other interesting examples using addressable LEDs as well and are written to use either the NeoPixel or FastLED libraries.  We have modified this one to use NeoPixel.h library only just to make it simpler.

This program creates 7 colored ‘balls’ that launch from the start of the LED strip at different impact velocities similar to how a pinball machine launches pinballs and they bounce back and forth on the LED strip with their velocities slowly decaying.  It is easy to change the number and colors of the balls by modifying the colors array shown below.

The brightness is set to 25 out of 255 (about 10% brightness) using strip.setBrightness(25); but you can set this to any brightness you want since only a few LEDs are being lit at a time.

It uses the NeoPixel library by Adafruit which can be downloaded from the IDE Library Manager.