These Infrared Phototransistors detect IR light and are used for IR remote control or IR obstacle avoidance and intrusion sensors.

Infrared (IR) is the light spectrum that is commonly used for IR remotes and is outside the visible spectrum for the human eye.

These phototransistors are used to detect the presence of IR which may be from an IR remote control, an IR emitter LED or even an open flame which also emits IR.

When used as an IR remote control for something like a robot, the IR is typically pulsed at a modulated rate of 38kHz to created coded messages.  Different manufacturers have different transmission protocols for these coded messages.  There is a library that can be used with Arduino called IRRemote.h if you are looking to create a standard remote control or other communication link that can make use of standard codes.

These devices are very useful for adding IR detection capability to a project including everything from creating a custom serial IR communication link for a robot project or to make an intrusion detector if the IR signal is blocked.   The device can also be used to detect an open flame.  If you need a transmitter for use with this receiver, you may also want to pick up our IR Emitter LED below. 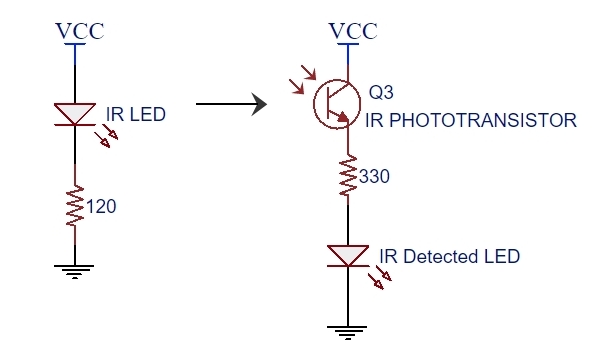