Provide electrical isolation of a signal between 2 circuits by using an optical bridge.

The PC817 Optocoupler is used to provide electrical isolation of a signal between 2 circuits by using an optical bridge.

Optocouplers, also called Photocouplers or  Opto-isolators consist of a combination of an infrared LED and a phototransistor in a single package that is used to optically couple an electrical signal through the device without using an electrical connection.  The device is uni-directional and can only pass a signal in one direction.

Inserting one of these in line with a uC pin will help to protect that pin, but in order to fully isolate two parts of a circuit, it also requires that separate power systems be used on the two sides of the circuit so that there are no electrical sneak paths back through the power system.  This is typically over-kill for most hobby applications, but something to consider when full isolation is desired.

When hooking up the device, two resistors are required to provide current limiting on the two sides of the device to prevent damage.

The first is a current limiting resistor on the IR LED input side of the device.  The absolute maximum current through this LED is 50ma, but in practice the current should be limited to no more than 20mA for safe use with a uC.  A resistor value of 470 ohms which gives a current of 10ma will work for most applications as a staring point.  A larger resistor can be used if lower current is desired or if the drive voltage for the IR LED is higher than 5V.

The second resistor is similarly used to limit the current flow through the phototransistor.  The max current is again 50ma, but it is typically operated at a lower current.  Depending on what the optocoupler is being used to interface to, typically either a pull-up resistor is used that connects between the collector of the optocoupler and the power (Vcc) that is being used on the output side of the circuit or a series resistor is used that is connected between the emitter and the base of a transistor if a transistor is being used on the output.  A 470 ohm resistor can usually be used as a starting point for this resistor as well.

These devices can be very useful for adding a level of protection when a uC needs to interface with scary type circuits or when long cables are involved that may pick-up electrical spikes.

The circuit below is useless, but it demonstrates the basic operation of the device.  A logic HIGH on the input should light the LED on the output. 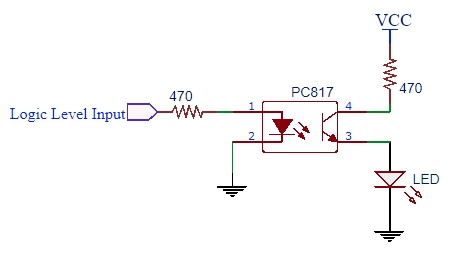