Besides adding WiFi capability, the main claim to fame for the ESP8266 processor over the AVR processor of the standard Arduino is that it has a larger 4 MB of Flash memory and runs at clock speeds of 80 MHz and can sometimes optionally be overclocked to 160 MHz and therefore has a fast processing speed.  These can be used as a stand-alone MCU in place of something like an Arduino or it can be used as a peripheral in conjunction with another MCU just to provide WiFi capability.

The module incorporates several common components including an RGB LED and LDR photoresistor which makes it more of a stand-alone device.  It also incorporates a pushbutton for initiating an action of some type.

All of the Digital I/O support PWM and interrupts except pin 16 which does not support interrupts.  In addition they can be configured to have pull-up or pull-down resistors.  Though there are 11 digital I/O pins, 2 are typically reserved for use as the TX/RX lines if serial communications are used which leaves 9 digital I/O for other uses.  Some of these 9 pins are connected to the on-board LEDs, but can also be used for other purposes if needed.

PWM range by default is 0-1023 rather than the typical 0-255 found on Arduino.   The range can be modified using the command analogWriteRange (255) which sets the range between 0-255.

The PWM frequency is 1kHz by default.  Similarly it can be modified using the analogWriteFreq(500) to set the frequency to 500 Hz as one example.

The pins are labeled GPIOx.  When using with Arduino IDE, the digital pin number is the samethe pin number, so GPIO2 is referenced as just ‘2’.

The small blue on-board LED is connected to pin 2 (GPIO2).

The on-board general purpose pushbutton on the top board is connected to pin 4 (GPIO4).

The RGB LED is common cathode and so lights when driven HIGH.  It is connected to the following pins:

Per spec, the digital I/O is limited to 3.3V, but the mfr has made statements that the digital pins are in fact 5V tolerant and there are many installations using the module directly connected to the logic lines of 5V MCUs, so use your own judgment.

The analog input A0 (ADC) is a single 10-bit ADC input which is connected to the LDR (Light Dependent Resistor).

The LDR has a dark resistance of about 2.5K and is in series with a 470 ohm resistor to form a voltage divider that feeds the ADC input.  The LDR is connected to the Vcc side of the voltage divider and the 470 ohm resistor connects to ground.  As the light intensity increases, the LDR resistance decreases and therefore the voltage on the ADC input increases.

By measuring the voltage, the relative brightness of the light falling on the sensor can be determined.

The module can be powered via the USB port on either the top or bottom board or by using an external 5V power supply connected to the Vcc pin.

The top module includes a 3.3V regulator which regulates the 5V down to the 3.3V required by the ESP8266.

The board uses the CH340 chip on the bottom board for USB communications, so the bottom USB must be used for programming or communicating with the module.

If you have any issues with connecting to the board, you may need to download a driver for the CH340.  Just search for Arduino CH340 driver and you will find a number of sources for drivers depending on what Windows or Mac operating system you are using.

The module comes preloaded with the NodeMCU software that accepts the standard AT command set.

It also can be programmed in C using the Arduino IDE and is how the modules are most often used.  An example program is shown down below.  If a program is download via the IDE, it will overwrite the NodeMCU software or whatever else was loaded before.  If that is a problem for what you want to do, the NodeMCU software can always be reloaded. 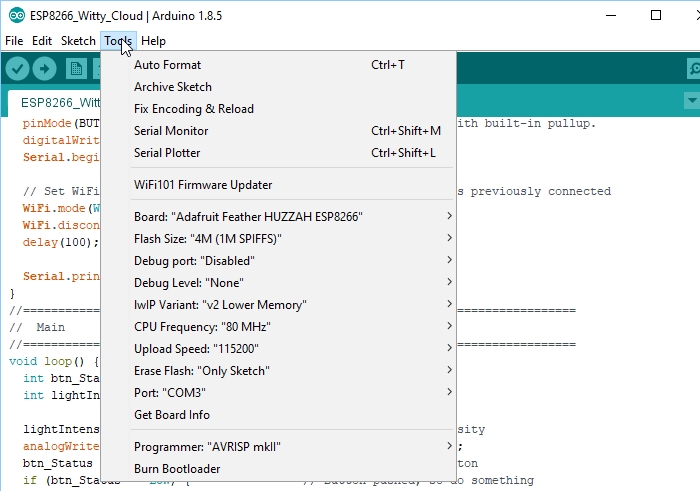 To test whether the board is basically working and you can communicate with it using the preloaded NodeMCU software, you can open a Serial Monitor Window and simply enter ‘AT‘ into the serial monitor top window and hit ENTER.  The board should return with ‘OK‘.  That indicates the board is alive and the setup is working.

If you don’t get the OK:

Things to Watch Out For

The micro USB connector has a very small footprint and solder pads which makes it popular for small MCUs where space is limited.  As with any MCU that uses the micro USB connector, some care should be taken not to put excessive strain on the USB cable or it is possible for the connector to be dislodged from the board.

The Witty Cloud (and ESP8266 processors in general ) have a couple of software quirks to be aware of compared to working with a standard Arduino.

First is that the compile and download time when using the IDE tends to be longer than for typical Arduino boards.  This is especially true the first time a program is compiled or if the build options are changed which require a complete recompile.  Subsequent compiles do run faster.

The second thing is that the module does not like long delays in code and it may cause the module to do a watchdog software reset.  This is because the module has a network stack to handle the WiFi and that needs to be serviced regularly by the processor.  An example of what not to do would be using something like a tight DO/WHILE loop waiting for a button to be pressed.

For instance in the example program down below, if you were to check the button using code like this which blocks the program until the button is pushed, you will run into this problem as it does not allow any free time for the processor to go off and reset the watchdog timer on occasion, so it thinks it has locked up and resets itself.

If the module keeps resetting every couple of seconds, look for this blocking type of issue in your code.  This can be resolved by inserting the yield() function into the loop as that function lets the processor go off and take care of other business before returning to the loop. 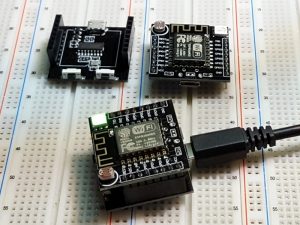 The program below is based on one of the sample programs ‘WiFiScan’ that is available once the ESP8266 boards are loaded into the IDE.  It sends the list of networks found to the Serial Monitor window.

The version here uses the built-in pushbutton to initiate the scan for any available WiFi networks and turns on the on-board LED while a scan is in process.  It also monitors the light level on the LDR and adjusts the brightness of the RGB green LED based on the amount of light that the LDR sensor is detecting.  If you put your finger on the LDR, the RGB LED should go out.

The only connection that needs to be made is the USB cable to the USB connector on the bottom board.  Ensure HUZZAH ESP8266 is selected as the board type in the IDE and the correct COM port is selected.  Once the program is downloaded, open the Serial Monitor window and ensure that the baud rate is set to 115200.  Once you press the pushbutton on the edge of the top board, a scan of the available WiFi networks will be displayed.