The Due R3 is a powerful Arduino compatible board based on a 32-bit ARM processor running at 84MHz and operating at 3.3V.  It is perfect for more demanding applications that require high processing performance and a lot of I/O.

Key Features of DUE R3:

The Due R3 is the same form factor as the Mega 2560 but has a much more powerful processor with more memory and operates at 3.3V instead of the more typical 5V of other Arduino boards.

If you need high performance and a lot if I/O, it is a good choice for more advanced projects.  As an example, the MCU is fast enough to synthesis music using the 2 DAC outputs.

The Due R3 operates at 3.3V which is regulated on-board and can be supplied via an external power supply or through the USB port connection.  The power source is selected automatically if both are available.  If an external supply is used, it is recommended to use a supply between 7-12V.  Our 7.5V AC adapter works extremely well for powering these boards.

The attached Due R3 board pin-out by Rob Gray shows the functions for the pins.  Note that most pins provide multiple functionalities.  Also note that the pins have a little less drive capability than the standard AVR based Arduino boards.  Most can source 15mA and sink 9mA, but some are limited to sourcing 3mA and sinking 6mA.  These are shown on the pinout.

The board is compatible with shields that support 3.3V and are compliant with the 1.0 Arduino pinout.

There is a built-in CAN bus (CANRX / CANTX) which can be accessed via the Due_Can library in the IDE.

The built-in 12-bit DAC outputs are a nice feature that is not found on other Arduino boards.

Programming of the Due is a little different than standard Arduino boards, so there are a couple of things to pay attention to.

The board has two micro USB connectors which are labeled on the bottom side of the board.

The one nearest the power plug is referred to as the Programming Port and connects to the ATMega16U2 USB to serial converter chip as used on typical Arduino boards. This port should be used for any programming activities.

The Due is not one of the default Arduino boards available in the IDE board selections. To install the Due device in the IDE, go to Boards Manager. Find and install the Arduino SAM Boards(32-bits ARM Cortex-M3). Once this is installed, two new Due Board options will become available. Select the Arduino Due (Programming Port) option.

The Due differs from other AVR based MCUs because the flash memory needs to be erased before being reprogrammed. This is normally handled automatically by the IDE as part of the programming sequence and you don’t need to worry about it. Should there be an issue like bricking the device with a bad download, it is possible to manually erase the flash by following these steps:
1. Press the on-board ‘ERASE’ button for 1 second
2. Press the UPLOAD button in the IDE
3. Press the on-board RESET button

If your board is not recognized by the OS or you run into any issues getting connected, check out the additional info in this link: https://www.arduino.cc/en/Guide/ArduinoDue

The main thing to note and pay attention to is that the I/O operates at 3.3V and is not 5V tolerant.  Level shifting may be required to interface to some 5V peripherals. 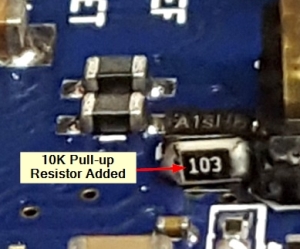 These boards are known to occasionally exhibit a power on issue where the program is not automatically run at power up until a board reset is executed.  We upgrade the boards by adding a 10K pull-up resistor to the ERASE_CMD line which solves this issue as shown to the right.

This improvement was added to the latest R3-E revision boards.

The micro USB connector has a very small footprint and solder pads which makes it popular for small MCUs or where space is limited.  As with any MCU that uses the micro USB connector, some care should be taken not to put excessive upwards strain on the USB cable or it is possible for the connector to be dislodged from the board.  Mainly ensure that you push the cable straight in or out and don’t pry it up in the process.

The Arduino Due Forum linked below is a good source of information on using the more advanced features of this board.