For use with Prototyping System for Teensy 4.1

The Audio Tutorial Adapter is designed to be used with the Prototyping System for Teensy 4.1 baseboard.  It provides the user controls to go through the Audio Tutorials and Workshop. These tutorials are based on the original PJRC Advanced Microcontroller Audio Workshop.

The board can also be used to provide general purpose pushbuttons, potentiometers and an LED for other experiments as well.

The Audio Tutorial Adapter is available in two versions:

Kit:  One is in a kit form.  All components are thru-hole and fairly easy to solder with basic soldering skills.

Fully Assembled:  The other is a fully assembled version that is ready to plug into the Prototyping System for Teensy 4.1 baseboard.

Assembling the board is straightforward since all components are thru-hole.

The only component that you have to be careful about orientation is the LED.  The flat side with the shorter lead goes toward the Pin 24/A10 silkscreen.

For ease of soldering and to minimize the risk of melting plastic, it is generally best to solder the resistor, LED and blue potentiometer first, then solder on the headers, then the pushbuttons and finally the tall audio potentiometers. 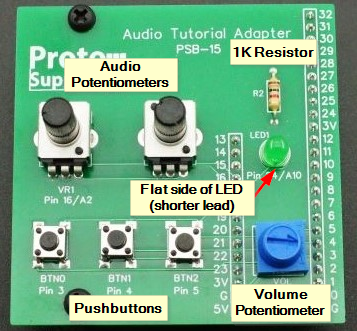 The Audio Tutorial Adapter is designed to fit on the right side of the Proto Adapter area of the Prototyping System for Teensy 4.1 baseboard.  The nylon standoffs support the left edge of the board since it hangs out in space.  Though nylon nuts are provided to lock the adapter to the baseboard if desired, they generally are not needed since the board just needs support when pressing down on it.

The Teensy 4.x (Rev D) Audio Adapter fits into the adapter slot on the left side of the Proto Adapter area. 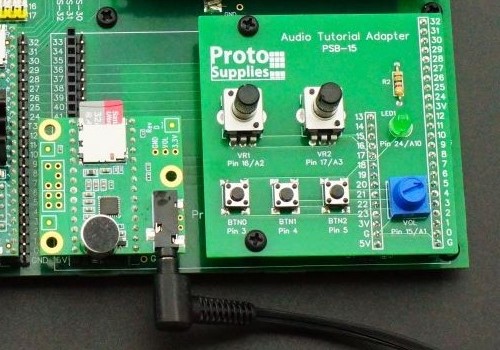 These tutorials closely follow the original PJRC source material but have been modified to use alternate pins to avoid conflict with the baseboard and in some cases have some additional functionality added, such as to make use of the built-in LCD.

The circuit changes from the original PJRC breadboard setup consist of the following: