This Arduino shield can control up to 16 Servo motors or LEDs via I2C interface.

This 16-Channel PWM Servo Controller Shield brings the I2C bus up from the Arduino and coupled with a PCA9685 provides 16-channel 12-bit PWM.  This can be used to drive up to 16 servo motors or LEDs.

The shield is compatible with UNO, Mega, Leonardo and similar Arduinos.  Since the shield operates from I2C, all of the Arduino pins remain available for other uses and are brought up to the top surface for easy access.  In addition, there is a 5 x 20 perf board section for general prototyping.

Microcontrollers can drive PWM devices such as LEDs and servo motors directly, but they are limited in the number of devices that they can drive.  This shield allow for a large number of PWM outputs using only 2 pins (I2C) on the MCU.  It also off-loads some of the processing requirements from the MCU so that it can concentrate on other tasks.  It also facilitates using external power to drive the servos which is important to avoid electrical noise affecting the MCU.

This 16-channel PWM controller is based on the PCA9685 chip.  It is designed to provide up to 16 channels of PWM control that can be used for controlling brightness of LEDs or for driving servo motors.   The module can be programmed with a PWM frequency from 24Hz up to 1.5KHz and each of the outputs has a 12-bit resolution.  In addition, the channels can be programmed fully ON/OFF to use as general purpose digital outputs.  They cannot however be used for inputs.

The controller sits at I2C address 0x40.  There are 6 address select jumper locations labeled A0 – A5 that can be bridged with solder if a different address is needed due to a conflict or if multiple of these shield boards are being used.  This is a binary address, so bridging A0 changes the address from 0x40 to 0x41 as shown below.

This is the main power input when using with servos and is used to power the motors.  This input has reverse polarity protection which may be a diode or a MOSFET transistor.

Do not connect V+ to the Arduino 5V as the motors will create electrical noise that will cause issues for the Arduino.  Also keep in mind the current draw of the servo motors that you select which can be quite high.  Most Servos will draw at least 100mA or more each.  If you are using this shield to drive LEDs, that can usually be done using the Arduino 5V as long as you stay within the current limits of the Arduino but larger arrays will require external power.

There is a spot to add a large electrolytic cap to V+ near the terminal block if additional filtering is needed. 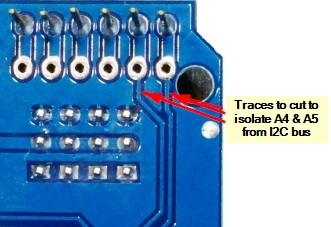 The male/female stackable headers bring up all the I/O from an Arduino UNO, Leonardo or similar Arduino.  The shield itself only uses the I2C data lines SDA and SCL but these lines are also available for other I2C devices.

Note: For compatibility with older Arduinos that don’t have dedicated I2C lines, the SCL and SDA pins also connect to pins A4 and A5 which are used on the older boards for I2C.  If you want to use A4 and A5 for other purposes with a newer R3 version Arduino, cut the traces to A4 and A5 on the back of the board to remove them from the I2C bus.

The output headers are numbered 0 thru 15 on the board.  Each of these connections has the following pins.

Note:  If using the module with LEDs:

These servo controllers work well for controlling multiple servos and makes connections much easier.  Once a servo is set to a particular position with a simple I2C command, the controller takes care of the overhead required to keep the motor updated which frees up the microcontroller to do other stuff.

The header pins that insert into the MCU are the flat sided blade type, so some straightening of the pins is usually required to install the shield onto an MCU.

The exact range of the servo can vary quite a bit between different types of servos.  Instead of 0-180 degrees, some may only go 20-160 while others may go farther than 180.  Interpretation of the pulse width such as 1.5mSec being 90 degrees can also vary quite a bit between servos.  Some experimentation is generally needed to characterize the servos that you are using.  In general, you don’t want the servos to be driven past a position that they can get to as that causes high stall currents and may damage the gears in the servo overtime.  In the program below, there are two constants MIN_VALUE and MAX_VALUE that set the limits for the motor.  These can be adjusted to suit the servos that you are working with. 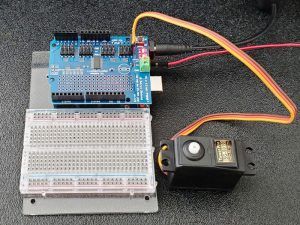 To use this controller, you must initially set the PWM frequency which will remain constant.  To generate a pulse every 20mSec as the servo expects requires a 50-60Hz PWM frequency to be set.

The program below uses the Adafruit_PWMServo library, so be sure to load it to use this program.  It can be downloaded via the Arduino IDE.

The program simply exercises a single servo on channel 0 to verify the shield is basically working, but this can be changed to any channel by modifying this statement int servonum = 0;

Simply plug the shield into an Uno or compatible board and hook up 5V/Gnd to the screw terminal connections.  Plug a servo into the channel 0 header.  Ensure the PWM wire which is usually orange in color is plugged into the PWM pin.  Both LEDs on the shield should be lit indicating both the board and servo have power.  Once the program is downloaded, the servo should start cycling.