Reflective sensor that detects a close reflective surface by bouncing IR light off it.

The TCRT5000 is a reflective sensor that detects a close reflective surface by bouncing IR light off it.

These sensors are used in many of the Arduino modules sold for obstacle detection and avoidance or for line following robots.  They can be used for applications where it is desirable to detect an object passing in front of the sensor at close range.

The sensor incorporates both an IR emitter LED which is blue in color and an IR phototransistor receiver that looks black in the same package. The emitter operates in the infrared range of 950nm and the receiver has a daylight blocking filter to help minimize interference from visible light. 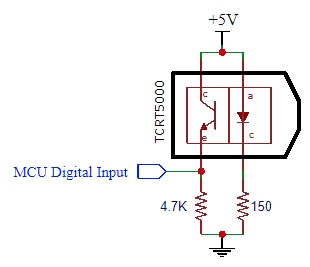 The maximum constant current through the IR emitter LED is 60mA and it has a forward voltage drop of 1.2V to 1.4V across it. In the example here, a 150 ohm resistor is used to limit current to 25mA through the emitter with an operating voltage of 5V.

The maximum current through the receiver phototransistor is 100mA. We are using a 4.7K resistor to limit the current to about 1mA since we are just looking for a logic output.

With the sensor wired up as shown here, the output will normally sit near ground due to the pull-down resistor. When a reflective surface is brought near to the sensor in order to reflect the IR light back toward the phototransistor, it will start to conduct and the voltage output will begin to rise towards 5V. 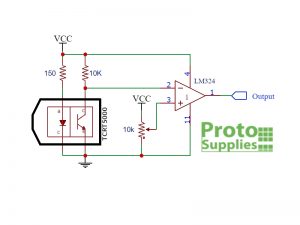 The output can be treated as an analog output and monitored with an analog input on the MCU. In this case, the output voltage gives some indication of the distance of the object from the sensor. Depending on the reflectivity of the surface, initial detection can occur at up to about 6” with a fairly reflective surface with the signal rising to near 5V (full detection) at around 1”.

When the output is treated as a digital signal, the detection range is generally kept under 1”.

The housing has two snap in ears for mounting in a circuit board.  These can be easily cut-off if desired for use in breadboards.