Solenoids are electromagnets.  When power is applied, a coil of copper wire inside is energized and becomes magnetized.  The armature of the solenoid that is attached to the locking latch is magnetically drawn into the center of the coil of wire, thus unlocking / opening the latch.  When power is removed, the magnetic field is removed and a small spring pushes the latch back out into the locked position.

This solenoid door lock is intended for light duty use as it has a fairly low extraction force.  It is best suited for light doors such as cabinet doors where little side force is applied to the latch.

For flexibility, the latch can be rotated to any of the 4 directions depending on mounting requirements.  To rotate the latch: 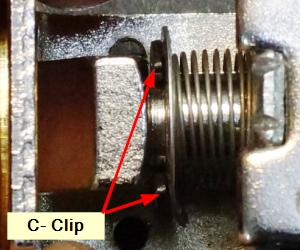 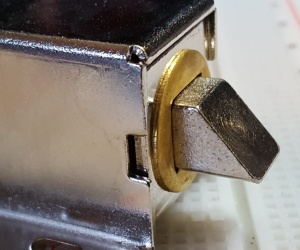 The solenoid requires a 12V power source that can supply at least 900mA.  The solenoid will operate down to 9V, but with a reduction in pull strength.  Since the power is just being used to energize windings, polarity of the two wires is not important to the operation of the solenoid.

A simple 12V AC/DC wall adapter can be used to power the solenoid.  The power is only applied for a short time to unlock the door, so some method of controlling the power is required.

If a logic controlled lock is desired, such as using a card reader to unlock a door, then a logic control power switching setup is required.  This can be something like a small relay or a power transistor to control power to the solenoid.  Because of the magnetic windings, a shunt diode may be required to 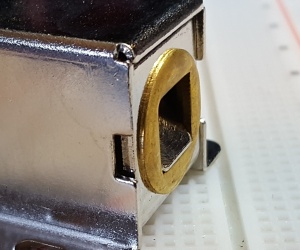 handle the current spike when the magnetic field collapses after the solenoid is de-energized.

As with all solenoids, power should only be applied for a short period of time (approximately < 20 seconds) to avoid overheating the windings.

When the latch is retracted, it sit flush with the housing.

These are nice quality solenoids perfect for light duty applications or to experiment with the technology.

As noted above, if using in an live application, ensure the lateral side force placed on the latch is minimal or the latch may not be able to open when power is applied.  For some snug applications, applying a little hand pressure to the door to relieve the pressure on the latch will allow it to operation.

For a stronger solenoid, check out our 12V 1.7A version below.