The Servo Motor MG995 is a standard size servo with a range of 180 degrees with good torque and moderate speed.

These servos have good torque for the cost and work well for experimenting with robotic arms, steering controls and other applications that require a fair amount of grunt.

The high torque capability comes at the expense of fast speed of movement due to the gearing.  A 60° rotation takes about 0.2 seconds.  That is fine for robotic arm movement or slower speed crawler steering for instance, but too slow for a fast moving RC car or flight controls.

Servo motors can be commanded to go to a specific position and so are the usual go-to motor when accurate positioning is needed, such as for turning the front wheels on an RC model for steering or pivoting a sensor to look around on a robotic vehicle.

Servo motors are comprised of a DC motor, gears, a potentiometer to determine its position and a small electronic control board.

Servos usually have a specified limited range.  This is usually specified as 180 degrees.  Frequently the actual range is not quite the full 180 degrees and is limited by the mechanical gears and potentiometer used for position sensing that is contained in the device.  If the motor is run all the way to 0 or 180, it may start making unhappy sounds and start vibrating as it tries to drive to a position that it cannot get to.  This causes a high stall current condition and has the potential of stripping gears and eventually burning out the drive electronics or damaging the motor, so it is best to either drive it to a safely reduced range such as 20-160 or experiment a bit to determine the actual usable range if you want to maximize the range.

Some versions of the servo may be specified as 360 degree continuous rotation.  In this case, the servo mechanical stops and potentiometer have been removed or disconnected and is designed to rotate continuously in either direction and is primarily used for drive wheels.

In our testing these MG995 servos have been fairly robust and can operate over pretty much the full 180°. 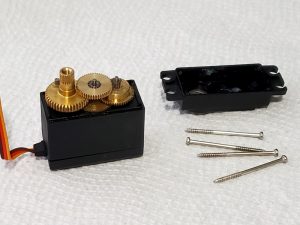 Construction is reasonable, though the motor attachment wires are not well supported, so could eventually break under high vibration operation.  Some epoxy or similar electronic safe potting compound could be applied to them if that is a concern.  The servo opens easily with 4 screws, just be careful not to let the gears fall out or it is a bit of a puzzle to put them back together.

Due to the metal gears, they are somewhat noisy.  On the plus side however, if you are going for a mechanical sounding killer robot, you won’t have to worry about needing to add any artificial sound effects.

The servo runs on 5V nominal with a current draw of about 10mA at idle and 170mA to 400mA under no load operation.  Current draw can get up to a maximum of about 1.3 to 1.5A under a stall condition.  It is not recommended to try to power one of these directly off of an Arduino board as it is likely to cause erratic behavior.  It is always best to drive them directly off of a separate power supply.

The program below can be used to exercise a servo motor by using a potentiometer to set the position of the servo.  This setup can also be used to determine the limits of the servos range by running the servo near its end-points and observing where it mechanically stops relative to the position command that is being issued.  The constants MIN_VALUE and MAX_VALUE are used to set the 2 end-points in the program below.

The program does some averaging of the readings to reduce the tendency for the servo to hunt or chatter due to analog noise when the potentiometer is not being adjusted.

Once the program is downloaded, open the Serial Monitor window and set for 9600 baud to see the servo values as the potentiometer is adjusted.