RS-485 provides for robust serial communications over long distances of up to 1200 meters (4000′) or in electrically noisy environments and is commonly used in industrial environments.  It supports up to 2.5MBit/Sec data rates, but as distance goes up, the maximum data rate that can be supported comes down.

You can think of RS-485 as RS232 on steroids.  The data starts out as typical TTL level serial as far as the microcontroller is concerned while the RS-485 module takes care of converting the electrical signals between TTL and the differential signaling used by RS-485.

This module is fairly unique in that it automatically takes care of data transmission direction control which makes it easy to use and it also has significant protection circuitry built-in to prevent damage in case of lightning strikes and similar electrical disturbances.

A significant benefit of RS-485 is that it supports multiple devices (up to 32) on the same cable, commonly referred to as ‘multi-drop’.

This works by passing the bus through each device where it picks off the signal as it passes through as shown below.

These devices are typically setup in a Master / Slave configuration with one Master and one or more Slave devices.  Since they all share the same bus, to avoid conflict the Slave devices only talk when they are asked for something by the Master such as requesting a temperature reading.

The RS-485 uses differential signaling and requires only 2 wires and a common ground.

Differential signals operate by putting the signal on 1 wire and the inverse of the signal on the other wire.  This improves the signals noise immunity and the ability to recover the signal at the far end of the cable as noise tends to couple into both lines equally and therefore cancels out at the receiving end.

These two differential data lines are labeled as A & B.  On the module, these are available on the screw terminal block end of the board at the solder pads labeled A+ & B-.

When connecting the modules together, the wiring is straight through, so A on one end should be connected to A on the other end and B connects to B.

The wires should ideally be twisted pair.  Using twisted pair becomes more important for longer runs or where there is a lot of electrical noise.  For simple breadboard testing or other short runs, it is not necessary.

A common ground is needed, but this can often be provided by the earth ground at each end when dealing with shorter runs or bench testing.  Network cable is often used for connecting RS-485 as it provides twisted pair, plus it can provide a ground wire as well.

If a shielded cable is used, the shield should be grounded on one end only.

There are 4.7K pull-up resistors on the A/B differential lines.  These pull the lines to a known state when data is not being transmitted. 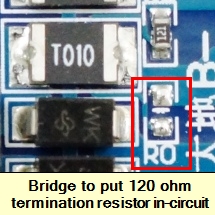 Finally there is a single 120 ohm termination resistor.  This resistor goes between the A & B differential lines on the modules at each end of the cable to prevent reflections.  As shipped, the resistor is not in-circuit.  To put the resistor in-circuit, the solder pads at location R0 should be shorted with solder or a wire.  If using in a multi-drop configuration, the modules on the two ends of the line should add these resistors.  Modules in the middle of the line should not use these resistors to prevent loading the lines too heavily as shown in the pic above.

For benchtop testing with short cables, this resistor can usually be ignored.

These modules have castellated (half holes) at the edges of the board along with a full hole. This allows the module to be used as a platform board by soldering the edges of it down to solder pads on a board under it.

The modules also come with a strip of male headers and a screw terminal block which can be soldered on either side of the board depending on intended usage.  The holes can also be used for direct soldering to wiring.

The module has a 4-pin header on the assembly for connections to the MCU.  Because this module has auto direction control, it does not require the extra DE/RE pins required by most other RS-485 modules.

The attached schematic is our effort to document this module.  The chip markings are removed, so there is a little guesswork as to the exact chips used, but the functionality should be correct.

You will need RS-485 on both ends, so typically you will need two of these modules to implement a basic link unless you are trying to interface with a device that already has RS-485 implemented.

When working with these devices, keep in mind that they are basically just level translators.  From the MCUs perspective, the functionality is the same as if two RS-232 serial ports are connected for communicating between the devices.  If there is difficulty in using the devices, they can often be temporarily removed from the setup to see if the issue is with the RS-485 or something more basic in the setup.  If they are removed from the setup, the RX/TX lines between the microcontrollers need to be crossed i.e. TX1 to RX2 and RX1 to TX2.

Because these devices include automatic direction control, the software is more straightforward than most RS-485 adapter modules. 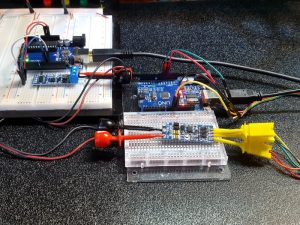 The programs below create both a Master device and a Slave device.  For this setup, you will need two Arduinos of any type (or other microcontrollers) and two of the RS-485 modules.  You will download the Master software to one device and the Slave software to the second device.  The programs use the SoftSerial library for communication in order to leave the hardware serial port available for monitoring the data on the Serial Monitor windows of the two Arduinos.  If you are using a version of board that has multiple hardware serial ports, you can use one of those instead if you prefer.

Both devices use the same pins for their soft serial port.  Connect as follows from Arduino to RS-485 module on both devices

The Master device allows you to type any characters in the top portion of the Serial Monitor window and once you press enter, it will send that characters to the Slave device.  When the Slave 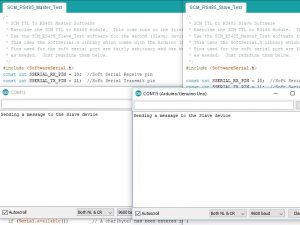 Note that if you want to use the Serial Monitor Window on both the Master and Slave device at the same time, or program both Arduino boards without moving USB cables around and resetting COM ports and Arduino types,  you will need to create two instances of the Arduino IDE.

To do that, you just need to open the IDE from the Start menu (or where ever you typically open it) twice.  You cannot just open a 2nd window from an existing IDE.   Once you have two separate IDEs running, open the Master software in one and the Slave software in the 2nd.  Configure both for the COM port and the Arduino type you are using with each window.  You will of course also need two USB cables to connect both Arduino boards up to your PC at the same time.

Nick Gammon has an excellent write-up on the RS485 standard and has implemented several useful libraries.