Custom board assembly to allow a crypto miner assembly to operate without the three power supply fans installed for dielectric liquid cooling application. 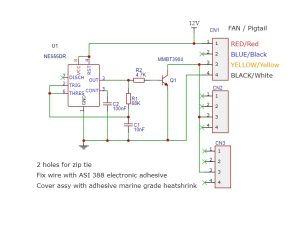 The module receives +12V power from one of the 3 fan connector pigtails.

This module contains an NE555 timer operated in astable mode with components selected to generate a 1kHz square wave ± 10% due to component tolerances.

The output of the NE555 drives a MMBT3904 NPN transistor which operates in open collector mode.

That open collector output is fed to the all three of the sense wires on pin 3 of the connectors.  This fools the PSU into thinking the fans are still attached and operating normally.

The PSA-6 board is panelized in a 2×5 configuration and comes in with SMD components installed.

Three 4-wire 2mm Pigtail cable assembles are inserted into the PCB and soldered in place.

Electronic safe silicone adhesive is applied to both sides of the pigtail wires at the point they are soldered to the board before they are laid flat against the board.

A zip-tie is then placed through the two holes and tightened to strain relieve the wire assembles.

The silicone adhesive is then allowed to cure overnight.

A 2.25″ long section of adhesive 5/8″ marine grade high shrink ratio heat shrink is then placed over the board and shrunk to fully encapsulate and insulate the assembly from the possibility of electrical shorts.

A zip tie is added to the 3 pigtail cables to bundle them together.

The three pig tails are plugged into the PSU fan connector locations.  The positioning does not matter.

The board assembly should then be stabilized in place by zip-tying to an adjacent structure to avoid strain on the wires and possible breakage over time.