5 each of red, green, yellow and blue LEDs.

This is a general purpose LED assortment that contains 5 each of red, green, yellow and blue 3mm diffused LEDs. 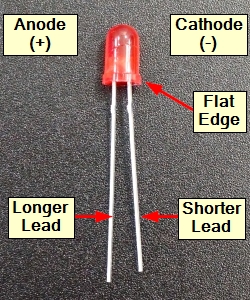 These are general purpose 3mm LEDs with diffused lens and good brightness that work well for general indicator use.  They come in a 20-pack and are perfect for stocking the project parts bin.

Being smaller than the normal 5mm LED, they take up less room when space is at a premium.

For size comparison, a 3mm LED is shown on the left, a 5mm is shown in the center and a 10mm on the right compared to a quarter in the picture on the right. 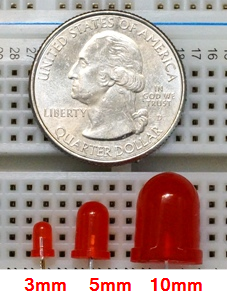 They are logic compatible with a max drive current of 20mA and a forward voltage drop of approximately 2V for the red, green and yellow LEDs and 3V for the blue LED.

A current limiting series resistor is needed to protect the LED and/or the device being used to drive it.

At an operating voltage of 5V a series voltage dropping resistor of 150 ohms for red/green/yellow LEDs or 100 ohm for the blue LEDs will provide max brightness.  A larger resistor of around 220- 470 ohm can be used to reduce current at a lower brightness.