These 5-digit 0.56″ 7-Segment common cathode LED displays include decimal points and are available in red, yellow, green, blue and white. 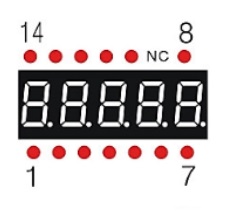 The displays are common cathode (CC) type which means that all 8 of the LEDs in each of the 5 digits have their cathodes tied together and these are pulled to ground to enable that digit.   These connections are labeled D1 – D5 in the drawing.

The connections for each of the individual segments such a ‘A’ are connected together in all 5 digits, so the displays are designed to be used in a multiplexed fashion unless you want all 5 digits to always show the same number or character which generally isn’t all that useful.

Multiplexing means that the ground connection (D1-D5 )for each of the displays is enabled sequentially by driving it LOW while the data for that particular digit is driven HIGH to light the desired segments on the 8 LED lines.  This is repeated for each of the digits very rapidly so that all of the digits appear to be operating continuously. 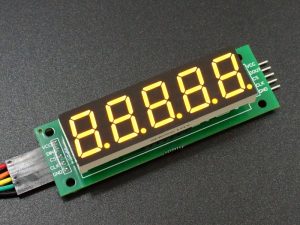 A much easier option is to use our PSA-4 MAX7219 display board that can mount 5-digit LED modules. 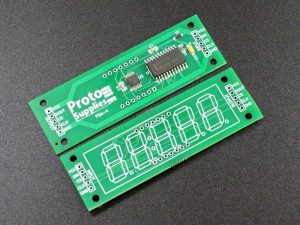