For Prototyping System for Teensy 4.1

Adafruit, the well-known electronic hobbyist company, created a product line made up of Feather boards which are small development boards based on various microcontrollers and stackable daughter boards called ‘Wings’ or ‘FeatherWings’.

The Feather Adapter treats the Prototyping System for Teensy 4.1 like another Feather development board and in turn mounts up to 3 of the FeatherWings for easily working with them.

The Feather Adapter is available in two versions:

Kit:  One is in a kit form.  All components are thru-hole and fairly easy to solder with basic soldering skills.

Fully Assembled:  The other is a fully assembled version that is ready to plug into the Prototyping System for Teensy 4.1 baseboard.

Assembling the board is straightforward since all components that need to be installed are thru-hole.  The SMD capacitors come soldered onto the board.  Keeping the headers straight relative to the PCB is the trickiest part of assembly.

To solder the male headers, they can be inserted into a couple of solderless breadboards to hold them in position for soldering or they can be placed into the female headers on the Prototyping System for Teensy 4.1 baseboard to keep them aligned while soldering.  The headers go into the outside rows of holes that is outlined by the silkscreen and near the pin numbers.    The inside holes are there in case you want to run some additional point-to-point wiring or to probe signals.

The Feather Adapter occupies the entire proto adapter area and inserts into the outer 24-pin female headers.  Up to 3 FeatherWings can be installed.  In the example below there is an OLED display and a NeoPixel array. 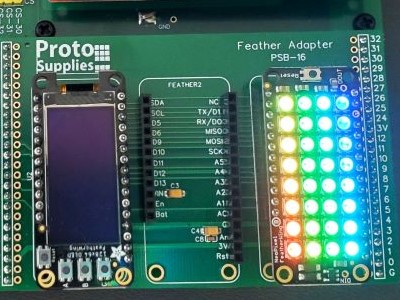 The pinout for this adapter uses the same pinout as the original Adafruit Teensy 3.x Feather Adapter.  That adapter allowed FeatherWings to be mounted as a daughterboard on top of the Teensy 3.x boards.

When it comes to individual digital pins and example programs, in some cases you may need to remap them.  For instance, the NeoPixel FeatherWing shown here by default is looking for data on D6 which maps to pin 3 on the Teensy as shown in the pinout chart below.   The FeatherWing allows you to cut a trace and solder bridge pads to change the pin used, but it is easier to just remap the pin in the code. 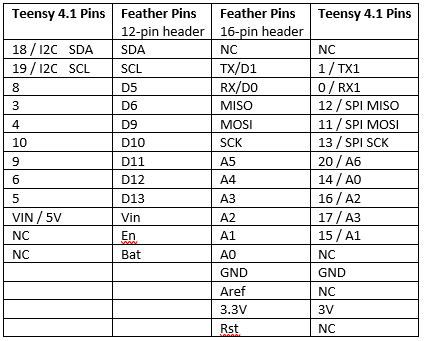 In some example programs, #define statements are used to remap the pins automatically depending on the target device.  Teensyduino is the software that allows Teensy to work with the Arduino IDE.  In the example code below, whenever the target is a Teensy, button A is being mapped to Teensy pin 4, button B to pin 3 and button C to pin 8.

The following Feather pins are not connected (NC) to the Prototyping System for Teensy 4.1 baseboard by the adapter.

You can checkout the available FeatherWings on the Adafruit website:  https://www.adafruit.com/category/945