For overclocking your Teensy 4.x

The Teensy 4.1 and Teensy 4.0 nominally operate at 600MHz which provides all the power most applications need but can be overclocked up to 1.008GHz with adequate cooling.

Many users of the Teensy 4.x products will never operate them over the default 600MHz where the processor is running within its guaranteed specifications and has all the horsepower that most applications need.  Tantalizingly though, the IDE allows faster overclocked speeds to be selected for those who simply like to push the boundaries or really need the fastest possible computational speed.

Increasing the clock speed can significantly improve the performance for number crunching as shown in the CoreMark test down below.  When the system limitation is due to I/O limitations such as SPI bus speeds writing to a display, increasing the clock makes little or no improvement.

When operated at 912MHz or higher, additional cooling of the CPU is needed to ensure it stays in its happy place.  This is done by mounting a heatsink to the top of the CPU to help dissipate the additional heat.

The attached heatsink increases the thermal mass and effective radiating surface area of the CPU allowing it to dissipate heat more efficiently even with no airflow.  With airflow, the heatsink can dissipate heat very rapidly.

For testing the heatsink, we ran the CoreMark benchmark program modified slightly to put the benchmark test in a repeating loop while also reporting the internal CPU temperature using tempmonGetTemp(); at the conclusion of each loop.  Each test was run until the temperature stabilized.

The CoreMark program is designed to work the CPU to its maximum on a set of calculations to determine its processing speed and so it works well for a worse-case test.  The program can be found here:  https://github.com/PaulStoffregen/CoreMark

The following results were obtained at a 21°C ambient temperature in open air with a Teensy 4.1 mounted on our Prototyping System for Teensy 4.1.

Adding the heatsink decreased the internal operating temperature by 7°C with no airflow and 17-22°C with airflow.

Light airflow was achieved by placing a modest 30CFM fan 21″ from the heatsink so only a very slight breeze could be felt at the heatsink.

Strong airflow was achieved by placing the same fan about 3″ from the heatsink.

The main downside of this heatsink is that it is relatively tall at 18mm, so requires adequate clearance above the Teensy 4.x.  There are of course shorter heatsinks available, but with all other things being equal, bigger really is better when it comes to heatsinks. 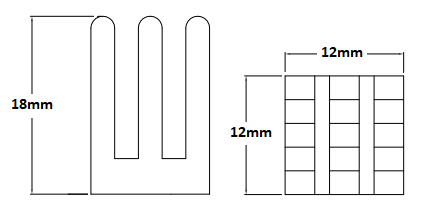