Internally, the AD9833 contains a 2.5V regulator and operates at 2.5V.  In the event that you want to operate the module at a Vcc voltage < 2.7V, the location on the board marked R1 which is normally open should be shorted so that VCC is connected directly to the CAP2.5V input which bypasses the internal regulator.

A red LED illuminates when power is applied to the module.

The AD9833 can be programmed to output either a sine, triangular or square wave.  When the module is first powered up, it automatically outputs a default 1kHz sine wave.

The AD9833 creates sine waves by the use of a numerically controlled oscillator, phase modulator, sin look-up ROM and DAC.

The output DAC is a high impedance 10-bit current source DAC.  A built-in 200 ohm load resistor converts the current to a 0.6Vp-p voltage output that swings between ground and about +0.6V.  At frequencies above 1MHz, the signal amplitude starts decreasing.

When the triangle waveform is selected, the sin look-up ROM is bypassed and the output of the NCO is sent directly to the on-chip DAC which provides a 10-bit triangular output.  The triangle wave output will also be approximately 0.6Vp-p up to 1MHz and then start to decrease at higher frequencies.

The square waveform is created by just sending the MSB (Most Significant Bit) of the DAC data to the output.  Unlike the other two wave forms, the square wave output is a logic level and will swing the full range from ground to Vcc over most of its range.

Connecting to the output

The output of the AD9833 is available in 3 places.  On the header pin marked ‘OUT‘, on the center pin of the unstuffed BNC connector location which is surrounded by 4 ground pins and at the pad marked ‘Tset‘.

The module has an easy to use 3-wire SPI interface that uses Data (SPI MOSI), Clock (SPI CLK) and Load (SPI SS) which is called FSYNC on the AD9833.

This module comes with the header loose.  This allows you to configure the module to meet your particular requirements such as which side of  the board you want the header on or if you want to solder on wires to make the connections.

For use with breadboards, we put the headers on the bottom so that the module can plug directly into the breadboard.

If you are working with the module using an O’scope, you may find it handy to add a header pin to the Tset location for hooking up a scope probe. For some applications, such as building a little function generator, you may want to add a  5-pin BNC connector to the module to allow hooking up to BNC shielded cables

The connections to the module are fairly straightforward.

These modules have good build quality and generally work well, but don’t expect to run them up to the maximum 12.5MHz frequency spec of the AD9833.  The AD9833 is a DDS (Direct Digital Synthesis) chip and as the output frequency approaches the clock rate, which is 25MHz in this case, the ability to reproduce the requested waveform starts to degrade.

Stability is good up to about 1MHz  and then the waveform start to degrade as the frequencies increase from there.  Depending on the output type, the signal holds together reasonably well up to about 5MHz.  Refer to the O’scope pictures below to get an idea of the expected performance.

The frequency accuracy is good.  On a sample basis we measured the following using the sine wave output.

Below are some O’scope waveform captures showing typical performance of the three waveforms at several different frequencies.  The measurements are taken at the BNC center pin location with a short ground probe contacting one of the BNC ground points.

These next three show the square wave output at 100kHz with an amplitude of 5.12V and then at 1MHz where the amplitude is still 5.12V but the edges are starting to show some roll-off and then at 5MHz where it is showing significant roll-off and amplitude has dipped slightly to 4.8V.

Getting A Look At The Output Of The Function Generator

This is not a trivial module to use due to the complexity of the output waveform.  Having access to an O’scope is highly recommended in order to determine what the output is doing vs. what you think it should be doing.  If you are working without an O’scope, a frequency counter can help determine at least the frequency of the output.

For experimenting purposes you can also feed the output of the generator into an analog input on an MCU.  By reading the data at a fast rate and sending it to the Serial Plotter window it is possible to capture the waveform.  For this to work reasonably well, the frequency needs to be kept low.  In the example shown here, we are capturing a 10Hz sine wave output of the AD9833 on an Uno.

The graph below shows the resulting Plotter Window output of the 10Hz sine wave.

If you have two Arduino boards, you can run this program on one and the program below on the other which allows you to control the AD9833 at the same time.  If you have a single board, you can set the waveform using the software below and then load the ADC capture program to see the resulting output.

The program below uses the MD_AD9833 library which is available for download directly from the Arduino IDE. 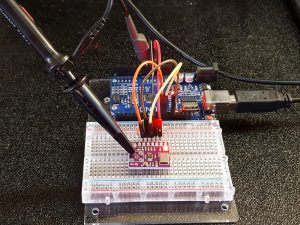 Connect 3.3V or 5V power, ground and SPI interface as shown below.  SPI MISO is not used since this is a write only device.  Be sure to update the SPI #define statements with the pins that your board uses for the SPI interface.  A couple of the more common ones are shown below.

The program allows you to select the type of waveform to output and to set the frequency of the output waveform.   Once the library is downloaded, a sample program is available which provides more insight into the advanced uses of the module but the logic can be a bit tough to follow.