The MIC2981/82 is an 8-Channel Darlington Driver is a logic compatible source driver for driving high current / high voltage loads.

The MIC2981 has 8 separate drive channels each comprised of  high current NPN Darlington transistor pairs with emitter outputs and with built-in kick-back diodes for switching inductive loads like motors.

It is a replacement for both the UDN2981 and UDN2982 which is why you will sometimes see it written as MIC2981/82 or MIC2981/2982.  These chips are similar to the ULN2803A that are very commonly used, except that those parts sink current while the MIC2981 sources current.

The driver is used on the high side of the load which means it is connected between the power supply and the load and sources current to the load.

A single channel can handle up to 50V@ 500mA.  The maximum per channel overall will depend on how many channels are being used and the duty cycle that the channel is switching at. 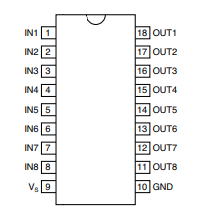 The channels can be connected in parallel for higher current capability.

The parts are in a DIP-18 package so they are breadboard friendly.